History and genesis of My Interactive TV®.

movie where you are the hero 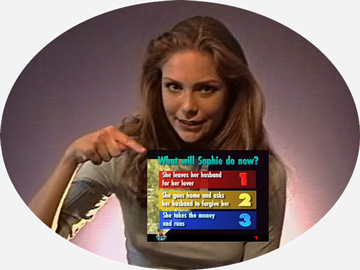 1997 was a very special year in audiovisual history, as two major changes were taking place.

An explanatory brochure is good...
A real film is much better!

Objective no. 1: Validate the concept

With such an innovative concept, there was only one way to verify whether the idea was good: make a first film!

First of all, among the different possibilities for interaction, we had to insure that the structure we retained, called “braided,” was manageable from the point of view of writing. In fact, from the beginning, we were persuaded that it was useless to explore a scenario in which a tree structure developed with each question (because of complexity and exponentially inflated costs). However, our preference for creating a form of convergence of the story at the end of each scene seemed a particularly difficult feat to perform from a plot perspective.

How many options to offer the viewer?

When giving the viewer a choice as to the rest of the film, how many options to present to him? We stopped ourselves at 3 options presented at each question. Our reasoning was that with only two options, the choice was too limited, basic, and all in all probably frustrating in most situations. Four options, and the problem would have been that the screenwriters would be stumped on that fourth way. Upon reflection, few situations in life offer us the ability to choose between 4 possible choices.

Is it only at the end of the film that the viewer can intervene (like in most of the preceding experiments in interactive film), or, to the contrary, at many occasions in the middle of the same episode? Finally, we decided on a rhythm of a question every 3 minutes (fairly respected in “Hypnosis”). In fact, contenting ourselves with asking the viewer a question only once per episode seemed to us to usurp the brand of My Interactive TV... On the other hand, to multiply requests, all while leaving the screenwriters enough time to develop a scene that could advance the plot, constituted what seemed like the best compromise between the two components of the concept: “fiction” and “interactivity.”

How to manage the writing and editing?

Once our interactive structure was perfectly defined, it was time to confront this terrible question: “is it even possible to write a screenplay which can hold up to the infliction all these constraints?” After a few weeks of relentless work, the response was definitely “yes,” but at the price of some serious headaches! A few months later, it was the editor’s turn to ask the same kind of question. Here, too, the film was the proof that the task could be carried out well, provided that the participants accepted the “masochistic” side of the concept. Fun for the viewer, yes, but it’s another story behind the scenes!

To make our plan a reality, and to make the concept of an interactive fiction series prestigious, we sought the support of veteran producers. We thus met some of the most influential producers in television, multimedia and video game production (Flach films, Pierre Grimblat from Hamster, Marc du Pontavice from Gaumont multimedia and Ubisoft, notably), whose welcome was altogether very warm, despite the fact that we were novices and totally unknown in the field. But as soon as we presented the plan to them, those we met imagined the potential of the concept, and several saw themselves participating in it. Among them, Gérard Guillemot was the most enthusiastic, going as far as to promise a generous part of the necessary finances for the first episodes to be broadcast, provided that the networks agreed to play them.
There was a ferment of ideas at that time, and producers were looking for new opportunities. We felt that our quest for producers was on the right track.

At the end of December 1997, we succeeded in getting a meeting with the directors of programming at two digital satellite television packages that had just been established in France: TPS (affiliate of TF1 and M6) and CanalSat (affiliate of Canal+). The meetings were rather colorful, since for lack of a DVD player (not available yet at that time) we needed to use 3 videos that we had to synchronize to be able to present the film in its interactive version... It was remarkable! We demonstrated interactive fiction with the help of the film Hypnosis. However, those who have lived in France since that time have noticed that there were no sequels to that meeting. To give you an idea of the discussions that followed the presentation of the film, here is one of the reflections that we were able to hear (we can’t say who expressed it): “Anyway, DVDs will be a flop; it will never work!” With more than 20 years of hindsight, and a market that has oscillated between 500 million and 1 billion DVDs sold worldwide* each year!, we can weigh the pertinence of that remark...
(* source: Digital Entertainment Group).

Do you have a comment or a suggestion to make?
Then send us a message here.

At the end of each sequence, you decide on the next installment of the story in response to the questions asked. Cool!

Hypnosis is an interactive movie that hinges on three scenarios, each more surprising than the last. (...) This chilling work (...)

Three times 19 minutes of suspense, lies, and betrayals of the heart. Enjoy!

It took lots of goodwill for the My Interactive TV® experience to become a reality!

The film exists thanks to them

It’s impossible to list everyone, but here are those most involved.

Your comments are invaluable to us! Take a few seconds to let us know what you think.

Do you have a comment or a proposal to make?

Write us a few words to let us know your remarks or your ideas.